Among the side events of the 53rd Venice Biennale in 2009, we want to point out the "Dance of the Bees" by Antonio Infantino and Santina Nocerino.

There's certainly something characteristic in this exhibition held from the 4th to the 6th June in Campo Santa Margherita (S. Margherita square). 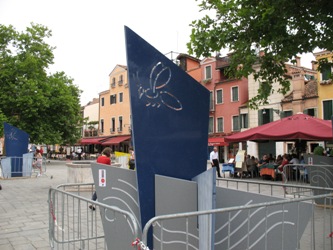 This work by Antonio Infantino and by the beekeeper Santina Nocerino joins together the world of bees with the world of art and dancing and wants to pass the barrier of human rational mind in order to try to get in touch with the bees' reason.

Since Konrad Lorenz revealed the secrets of many animal species' minds, many men have been astonished in discovering that their own emotions and empathy were harmoniously related to those of non-human species. These impulses aren't usually described through words, but lived through actions responding to emotional tensions that urge inside us because of impulses whose rational origin is unknown.

Konrad Lorenz in "The decline of mankind" wrote:

"The beauty can't be reduced to a quantitative dimension, but still we perceive a difference of value between superior and inferior harmonies. The organization of a fungus in itself represents a wonderfully harmonious whole; but when we see a rose garden being attacked by a fungus we are ready to intervene to save the superior harmony of the rose. We admire the beauty of ciliates, with their structure made of a macronucleus and many micronuclei, with a silver reticular film wrapping them and their cilia moving according to a pace. But when we see a fish being attacked by one of these ciliates, the parasite Ichthyophirius, we feel the disease it's creating to the animal that hosts it and can't feel any pity for it while curing the affected animal." 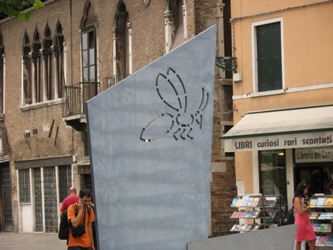 There's an emotional empathy that links us to the living Beings of Nature. This empathy reminds us that we "are equal" in the emotional tensions that run through us and that different shapes are a result of the adaptations made by the species to vehiculate their tensions, but these tensions are the same in every Being of Nature: in every child of mother Hera. If we go beyond the shape, we meet the emotions: we can see them in the Bee as well as in Human Beings. 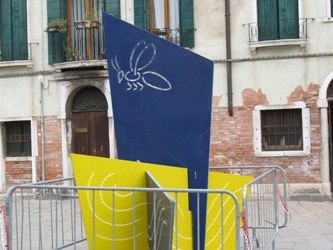 This is the meaning of the artwork by Antonio Infantino and Santina Nocerino: to lead the man beyond the shape to meet different minds and communicate with them. To communicate. If the man were able to think to animals as to intelligent subjects that plan their existence through a complex communication system made by sounds, visual and olfactory signals and body movements, he would not separate itself from the Nature by believing he's made in the owner-god's own image, but he would rather take his place among the Beings of Nature. If the man could understand that there is a language like the bees', that is more complex and articulated than the language of words, he would understand the infinite complexity of the surrounding world. The twenty-six letters of our alphabet are dull, without depth. Their highest point of expression is the use of capital letters. On the contrary, twenty-six smells have thickness and intensity due to their frequency and width. Is the man really sure that with twenty-six smells we could construct less words and ideas than we do with twenty-six letters? If the colonialist had conceived something like that, would he have destroyed the alphabets made of colours and knots in Latin America?

I, as a Polytheistic Pagan, draw on Antonio Infantino and Santina Nocerino's work, that, by revealing us the world of the bees, says to us that there is an immense emotional world that surrounds us. We are emotionally attracted by this immense, but the omnipotence of our rational mind separates us from it. This separation is what Antonio Infantino and Santina Nocerino are trying to overcome, by awakening feelings in those who look at their artwork.

In Campo S. Margherita the sculpture are arrenged in quite a random way, so imitating the ways followed by the bees when swarming. The sculpture are made of okite, that, according to Mr. Infantino, is the symbol of contemporaneity. 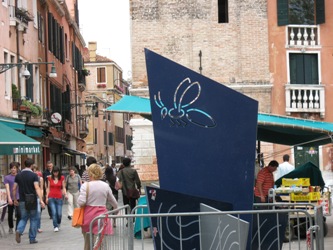 When we look at Animals, we often forget that every Being of Nature, and ourselves too, walks through a path from the birth of the physical body to its death. We live only for death. The rational mind prevents us from being aware of this when it imposes to us the delirium of being eternally omnipotent; lately this delirium is conveyed by education through self-destructive ways. When we lack of this awareness, we forget to live emotionally and intensely every moment of our existence. Too many people forgot to use the "winged words" of the Gods, that means to fill their words with their emotions and aims. On the opposite, the words themselves are used to deceive and penetrate the individuals through the internal dialogue, leading the individuals to deceive themselves, to self-impose moral dogmas or existential limits that bring them to mental diseases as the break of the emotional relations that we should instead foment in the world in which we live.

This is why people have been educated to live for something other than themselves. They live for their job, for the money, for denying wellness to other people, for imposing a moral or duties. They don't live for themselves like the Bees or other Beings of the Nature. People put before themselves a duty that actually denies the pleasure of life. So Death is frightening and not the triumph of their existence. It's desperation instead of being glory. While we try to make a sense out of the life of animals, we usually forget that they are living for themselves and the sense we are looking for is in their life itself. When human beings too will find the sacred sense of life in the life itself and not in external objects, then they will return to the nature and the emotions that led the construction of our intelligence since we were in the primordial soup will reconnect the relations with every other Being of Nature's intelligence and body.

The exhibition of artworks by Antonio Infantino and Santina Nocerino will end on the 25th July 2009, in Campo S. Margherita in Venice.