These two great artists bring in Venice art representation which reflect buddhist ideas. Creationistic and fatalistic ideas among which the idea that "all life is pain" rules and so separation, or the futility of life, are expressed through artworks.

These works were made by Atta Kim, from Korea, and by the patriarch of Forshang, buddhism, Lee Sun Don, from Taiwan.

These artists are different for what concerns their culture, but from a western point of view they are ideologically close to each other.

Atta Kim presents his empty cities and his ephemeral works.

These cities are without people inside them; they are decontextualized from the Human Being who built them and uses them. These cities seem to have been created by an unknown hand and given to the man as a gift. The man as a subject, whose time is comprehended in the city's time of existence, is nullified even as a species. The man is expelled from the city. It's the emptiness of the place that is not inhabited and not even built. It's a place that has been created from a subject external to the place itself. 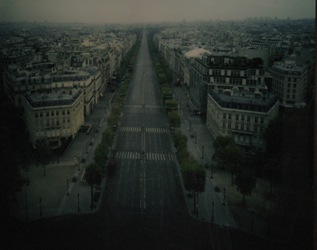 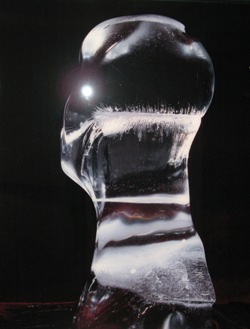 Empty cities by Atta Kim lack of the emotions of life. 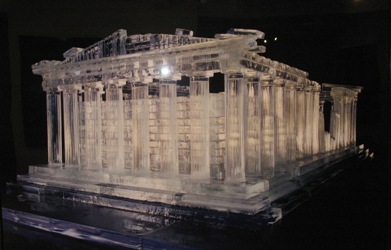 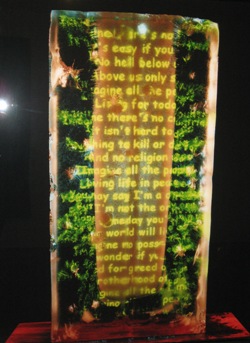 Empty cities by Atta Kim lack of emotions of life.

They are a pure rational deed, lacking of the emotions of people who stacked the stones and planned a change.

This dissolution by Atta Kim is the representation of the uselessness of every thing and of every existence, which loses the sense of itself. According to Atta Kim the form turns itself in emptiness inside the idea of the world as pure form and as solving itself in the form.

It's like the Buddha that goes out of his palace and suddenly discovers the pain, the illness, the old age and the death as things able to damage his wellbeing and dissolve it. Like Buddha's idea of change implies only the change towards the dissolution of the present moment, so in the works by Atta Kim there are no growth and no enrichment of the present, but only decadence of an ephemeral human present. In buddhism there are no representations of how much sacred is a growing child, but there are only representations of the adult that through pain, illness, old age and death goes towards the dissolution of the ephemeral.

In buddhism there's no sedimentation of emotional tensions in everyday life, but only detachment from everyday life, from objects and from desires, being afraid of the possibility that these can cause pain.

Atta Kim exhibition is at Palazzo Zenobio near the Carmini, (Dorsoduro 2596) until the 22nd November 2009. 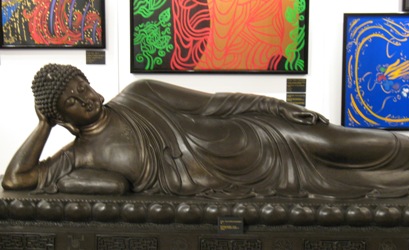 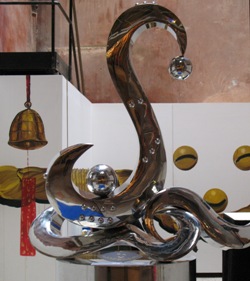 The detachment is represented in all its pictures with religious subject in which "the becoming Buddha" is depicted. Lee Sun Don began these works in Venice and plans to finish them at the end of the exhibition, in a constant dialogue with visitors. He'll develop his works interactin with interviews to visitors and construct a great video work.

The separation from life is well represented by the exposed statue of Buddha by Lee Sun Don himself. The laying Buddha is completely indifferent to the world because it doesn't concern him. The buddhist meditation itself is detachment from the world, while Pagan meditation is a way to enter emotional worlds. Buddhist detachment doesn't concern the form but the emotions that the form represents. When a buddhist detaches himself from the world, he doesn't detach himself from the form, but from the empathic relations with the intelligences of the world that may arouse desire, emotions and so pain conveyed by the physical form that perceived and desires. The buddhist doesn't face the causes of his pain, but his perception of pain that is the cause of his pain.

The reincarnation separates the mind, the reincarnating soul, from the body. The body, according to the buddhist as well as to the christian, is an external object, a prison for mind and soul. Like in the Corpus Hermeticum, everything that the imagination thinks is good belongs to the soul and everything that is evil and pain belongs to the body: this kind of division is arbitrary but fulfills the ideology (but what it's forgotten is that the perception of pleasure from good things belongs to the body). This allows to consider Buddha's bliss as an ideal for every buddhist that breaks the cycle of reincarnations.

In Western cultures the emotion is a world, origin of Beings and empathic relation of each subject inside nature, during its lifelong efforts; the emotion opens the channels of the mind's enlightenment, that is the flowing of emotional comprehension of reality towards the reason and the coming of perceptions (that usually the mind deletes and relegates in depth) to the rational consciousness through the "ancient part of the brain". In Eastern cultures the detachment from the world leads the man to perfection.

In the Western world, the myth tells stories (because you can't do anything else than telling stories as a rational effect) about the change in the present moment that occurs because of deeds done in the worlds of emotions and in the worlds of action; in the Eastern world the buddhist tells stories about detachment from emotions and from actions in order to reach beatitude (that is represented also by "seductive women" but in a transcendent context separated from everyday life and related to the desire of the transcendent).

According to the Pagan Religion, wishes, passions emotions and actions mould and construct the energy body that grows inside the individuals, adding to every passion and emotion new strenght and structure by the deeds of the body that inhabits the world in which it lives. The buddhist's body doesn't add anything to his soul. The body itself is a "punishment" because he didn't break the cycle of reincarnation. Like the christian mortifies the body, the buddhist disciplines it in order to make it work for the denial of desire,or to mould it according to an ideal he imagines.

In Polytheistic Paganism, the physical life is an opportunity to be caught; according to the buddhist, his life is part of the cycle of reincarnations; according to the christian life is a gift from his god, a gift to be mortified in order to free the soul that may return to his god.

The buddhist understands only the "undisciplined and self-destructive" meaning of the words Dvesa, Dosa (both mean aversion, hate, revenge, justice as a need sometimes expressed in a violent manner), Moha (infatuation, falling in love), Kama (sexual love, need of orgasm), Raga (passion or thirst for life), in his world which condemns these ideas and practices. The buddhist imagines that a personal apocalypse will happen if he abandons himself to that or practice that. He doesn't see that these are forces from which the life was born, and himself too, since he's an expression of Nature's life as a whole, to which he's linked through his emotions with empathic relations of his deep essence, from which he tries, with a despising attitude, to separate himself.

The buddhist, through the enlightenment, awakes the "god", the Buddha is the "awakened one" inside him. On the contrary of what happens with Polytheistic Pagans, who construct the god inside them, the buddhist doesn't construct him but awakens him through practices of meditation and renunciation.

In that we can easily read the reasons of the war made by the Dalai Lama against the Tibetan people. So the Tibetan people should not live for themselves, but as a slave to the monks who, meditating, free from the worries of everyday life, awake the Buddha inside themselves.

The art reflects all this: the Polytheistic Pagan lives his life and disciplines his own impulses to channel them in the social objectivity of the world in which he was born; the christian denies life, imposes pain on life, for the greater glory of his master god; the buddhist detaches himself from life and from its impulses because he sees in life only pain. So the Polytheistic Pagan runs towards the death of his physical body because his run is the construction of his luminous body; the christian waits in anguish for the death trusting on his god master; the buddhist destroys his own relations with the world trying to avoid reincarnation. Then, the life will render accounts to every man, whatever his "religious belief" may be, and we must foot this bill during our existence. This is the starting point for heresies and different ways to "interpret" religious dogmas.

At a certain moment in history happened that the christian Western world, which sacrificed his children to the glory of its god by destroying their attention and aim of being in the world, met an Eastern world whose children discipline themselves by shifting their attention outside and inside themselves. The responses of the Eastern world followed the first conquests and violences by the Western christians. These responses adapt and change during the time, so forcing the christian Western world to succumb in its own moral misery, it has built with the submission to its god. 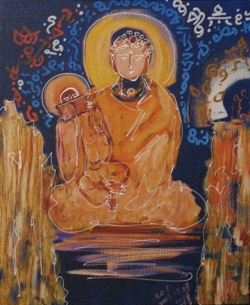 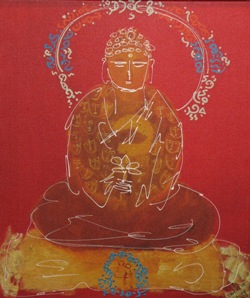 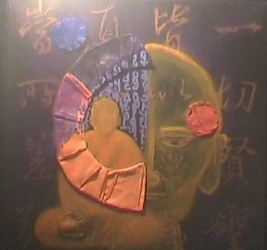 All this reflects in artworks by Lee Sun Don who, using religious symbolism, fascinates his visitors. 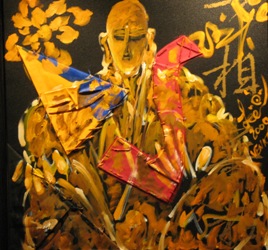 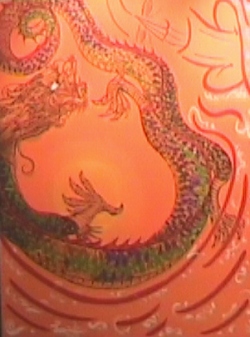 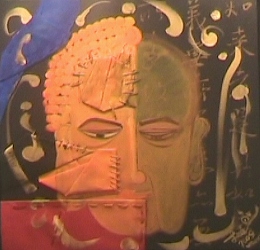 Lee Sun Don often uses the Dragon as the symbol of a "universal whole". It's the feeling that every Nature's Being has to be part of a "whole" and, at the same time, it's the religious ideology which describes this "whole" as a projection of the religious individual's imagination who puts himself at the centre of this "whole" and detaches himself from that "whole" to become judge and representative of that "whole" The Dragon, in many Chinese uses, represents the Emperor as a universal absolute. It's someway similar to the One of the Neoplatonics. "The power of the Dragon, Chuang-Tzu teaches, is something mysterious; it's the solution of the opposites; so Confucius saw in Lao-Tzu the personification of the Dragon itself". And the buddhist from China and Japan owe a lot to Lao-Tzu.