Damson is an artist exposing in Venice at palazzo Zenobio, Dorsoduro 2596, with an exhibition curated by Fabio Anselmi, open from the 07th June to 07th July 2009. The title of the exhibition is "Life death love loss". 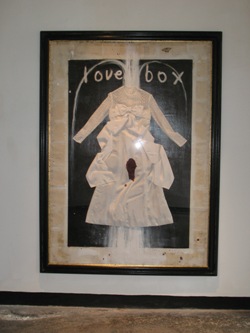 To describe her artworks, Damson, who is from Australia but resides in Venice, writes on her website:

"The motivation behind these works is to translate into three-dimensional form stereotypical phrases or concepts.

The white dress is a recurring symbol. Like a canvas which fulfills a duel function, it speaks of sexuality and feminility in the intimate side of daily life, at the same time asking us to reflect upon the social implication of such."

But we, who have grown up in a catholic ambient, know the source of this terror very well. 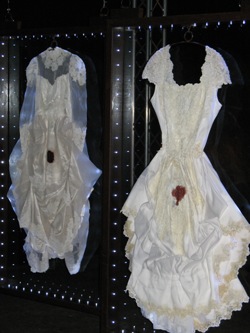 For verginity instead we must look at how this idea has been translated from Ancient Religions to Christianity with a deep change of sense and meaning.

The break of the hymen as a mark of possession of woman by the man. The symbol of the white dress has been turned, in western tradition, into the christian madonna performing the magnificat of submission and of giving herself up as a person with an intelligence, wishes and ability to organize her own future.

The white bride dress and the control over feminine sexuality express the need to control the woman. 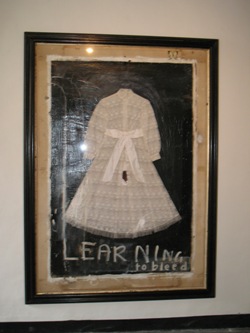 The woman is considered only for her sex as far as her intelligence as a person's is denied. So the woman who gets married in a white dress becomes the symbol of the renunciation to her intelligence and personality and of the self dedication as a sexual organ that must be controlled and certified by the white dress.

Today we have already lost the real meaning of the white dress, but the need to mark the human cattle in order to reduce it in categories into which it can be controlled has been preserved.

When a society marks the woman in order to reduce her in a category to be controlled, this society is raping itself and its future.

This is what Damson, art name of Melissa Wauchope, says: 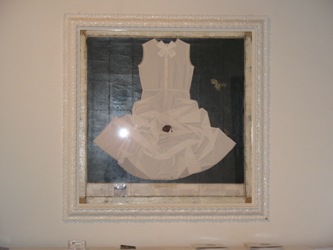 "Thematically, her works evolve around the body, examining in particular our metabolic, reproductive and organic processes, our instinctive impulses and the frailty of the human condition."

To set the bodies free from both emotional and physical restraints is typical of the impulse of Necessity, "Ananke", inside every Being of Nature.

It's through the process of removal of all the moral encrustations imposed by christianity that the Human Being can meet the Gods and construct, in the world in which they live, the emotional relations which can lead them to the Olympus of the infinite.