Since now, I've been interested in two artists only: Issam Darwich and Yasser Hammoud.

They deal with the theme of the body, the awareness and the enlightenment.

So the lightning bolt rips the darkness in the artworks by Yasser Hammond and nothing is like it was before.

Three paintings, put in sequence on the floor, describe a relation between the darkness and the light that rips it. A wonderful poetic expression. All men enlighten. All our growth, since we come out from our mother's womb, is a sequence of enlightenments on our rational minds through intuitive explosions that appear like light in the darkness. While we are growing, the unknown that surrounds us unveils through intuitive explosions.

The adult person who manages to discipline his/her own rational mind so that it can allow intuitive explosions one after the other, gobbling them up and therefore modifying him/herself will become like a child who grows through one amazement after the other. This person, even facing the death, is amazed like a child who is born, instead of being afraid because s/he "has to die". 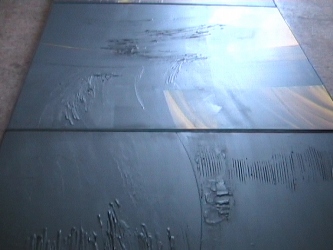 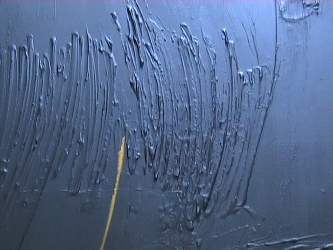 But, lo, that wall, the darkness of the rational mind is enlightened by an intuitive flash.

There are men who struggle to preserve their rational mind like a big gray table. These men fix their ideas, their way of being in the world, inside fixed moral and ethic principles to which they force their tendons, their nerves, their passions. With a gesture of iron will their impose the agreement to those moral and ethic to themselves, even when those moral and ethic become fatiguing, inadequate, counter-productive for their life. There are men who look for intuition, loosening the gray of their rational mind, trying to compenetrate the universe surrounding them intuition after intuition. They are precarious to every rule, elusive to every moral category, they often lose themselves in the immense light of an intuition they can't control nor discipline. The desire to perceive usually overcomes them and often, too often, they look for shortcut for intuition in luminous worlds, in which they don't know how to sail, and lose themselves in inconsistency.

Father Zeus locked the Titans in the Tartarus behind bronze doors, leaving to the Beings of Nature the gray rational mind, so that they could construct their divine pathways. Among all Titans, Prometheus brings the sparkle of intuition to the consciousness of the men, so that s/he remembers that his/her pathway in the existence isn't a long waiting for the death, but it's intuitive growth in the world in which s/he's born. 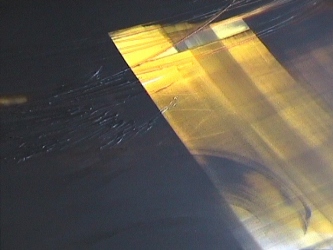 Yasser Hammond remembers us that. 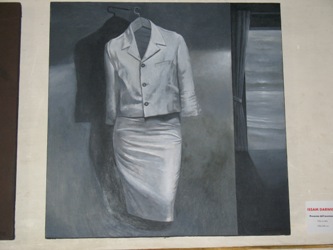 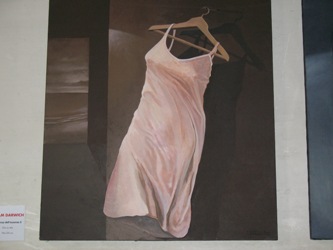 A memory fixed by Issam Darwich through his clothes. 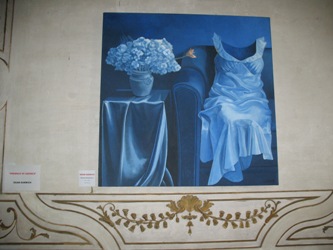 With his "presence of the absence" Issam Darwich allows us to think about the difference between the body and the corpse. The corpse, symbolized by the dress, stays in an ensemble and doesn't perceive the world because it lacks the characteristics of the body. A corpse, represented by the clothes and their shape, walks through the world but without living in it. Without gobbling it up. Without perceiving it.

Issam Darwich talks about the detachment of the shape from perception. A shape that stops every perception both in the representation and in the visitors.

Every exposed painting has a single color tone. A color tone that characterizes the whole painting.

To this selfimposed category, Issam Darwich has a single form of rebellion: the one of Mother Aphrodite. In the blue painting there's a little red flower. Like a living body that expresses an emotional motion which can perceive a world made only by shape and without relations. Its shadow is cast on the blue dress as if it would like to bring back to life, to the perception of the world, the corpse of a subject absent from the world.

The Syrian Arab Republic takes part to the Venice Biennale in 2009 with the exhibition "The artist's room" of Italian and Syrian artists. These are the videos about the exhibition. Five short videos.

Issam Darwich brings us to think about our being in the world and makes this by choosing to present us what can't be a subject in the world because it lacks of the perception of the action required by the living in the world.

Don't separate ourselves from the world: don't tie ourselves to a static and motionless shape. Let's allow the light of Aphrodite to enlighten us and lead us to take part to the emotions of the world.