The infinite anguish of immobility caused by guilt-feeling

Francis Bacon is a painter who is considered very important for the 20th century art.

At the Biennale some drawings by this author have been presented. These drawings were at first considered a fake until the final sentence by a court declared them to be authentic, both because of their "monstrous" subject, very common in Bacon's artworks, and because of the signature. Francis Bacon used to destroy his drawings. These ones have been given as a present by Francis Bacon to a close friend.

But it's not the history of those design the most interesting thing of this exhibition, entitled "the tip of the iceberg", in the Syrian Republic's pavilion.

I'm interested more in the emotional effect, in the relations recalled by these drawings.

This is what I'm going to talk about: I'll talk about the eternal and deep sadness that promanate frm the drawings.

The man, in Bacon's drawings, is a prisoner.

The bars of his prison are created by his impossibility to vehiculate his emotions and passions in the world.

That deleted faces of these men, who sit or lay, tied, in an immobility that separates them from the world, represent the soul of the artist locked in a prison with walls made by social hostility.

It's his hostility towards society or the hostility of society towards his passions and desires?

A research about the artist will solve the riddle. This can be done by art historians, not by a sorcerer who sees the deep sadness of these drawings.

The man who can't live in the world.

The man who can't construct himself because anguish paralyses him. 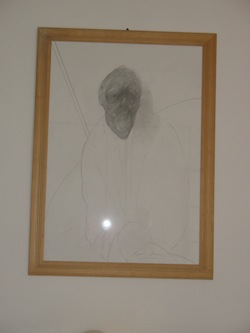 What paralyses the life of the man?

Which fears can stop the man? 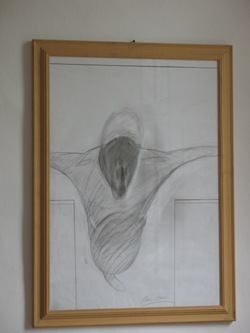 What turns a Being of Nature into a paralysed zombie?

A man can struggle, fight, conform, act between the folds of an hostile present. A man can suffer, but at the same time he continues to desire, to need, to yearn for the fruits that the objectivity of his present denies him.

In Francis Bacon's drawings we can see the GUILT-FEELING!

The guilt, from which the guilt-feeling was born, is the basis of the subject's depressed psychical condition and explains the feeling of being close to the future, which makes the past time, when a real or presumed fault has been committed, become an absolute time and psychic situation beyond which the subject can't go.

The guilt can't be deleted from a melancholy consciousness: it becomes a fact that enters the history of the individual. It deletes every hope in the redemption from the fault, and therefore the horizon of the individual's future, which could allow him to go beyond the past events and delete the guilty present time, disappears. So the guilt is no more related to the event that caused it, but becomes an object in itself that blocks the subject's emotions and prevent their vehiculation in the objectivity. The guilt becomes the moral act that embroils the subject in the "contrition" and promotes the depression as the impossibility to free oneself from that real or imaginary fault. 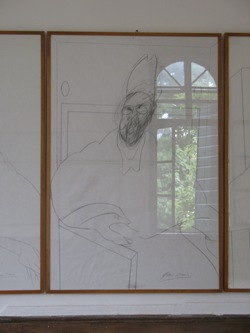 This is the situation induced in Francis Bacon. 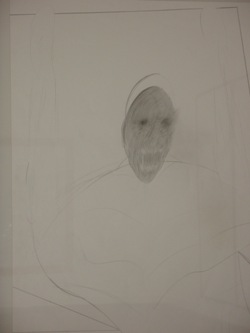 This induced situation's desperation is reproduced in his drawings. Maybe this is why Bacon used to destroy his drawings once done. But not these drawings. They were given to a close friend who was able to understand the reasons of his depression and lack of prospects for his own future.

Francis Bacon didn't fear of confiding his inadequacies in front of the world to his close friend. His friend accepted him as he was and so Francis Bacon gave those drawings to him.

And now we can look at them and let us be overwhelmed by the immense sadness that these drawings communicate, so that to make us understand how great enemy of humanity is he who imposes a moral that creates guilt-feeling, closing the future to Human Beings.

So spoke Pericles in Thucydides' work, about moral matter:

“The freedom which we enjoy in our government extends also to our ordinary life. There, far from exercising a jealous surveillance over each other, we do not feel called upon to be angry with our neighbour for doing what he likes, or even to indulge in those injurious looks which cannot fail to be offensive, although they inflict no positive penalty.”

If Francis Bacon had adjusted his mind and emotions to Pericles' moral instead of gospels' moral, he wouldn't have seen his future blocked, nor he would have been overwhelmed by distressing guilt-feelings.

And, we wouldn't have been overwhelmed by the deep sadness in his drawings!