Goce Nanevski lives and conveys his religious perception that emerges from Macedonian culture.

When I say 'religious perception' I mean the emotional tension that brings the artist's perception around the world. Then the artist represents his emotions by his artworks and through the emotions he constructs emotionally involving relations between what he preceives and the visitor of his exhibition. 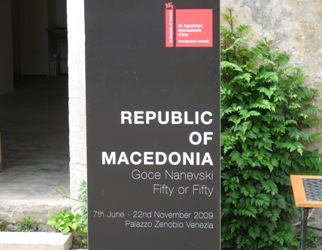 Goce Nanevski, in Venice for the 53rd Biennale, represents the "objective situation in which his emotions move".

His artworks, presented by the Republic of Macedonia, describe the feelings of the Macedonian, but, I would rather say, of the Western people in general.

The artworks by Goce Nanevski consist in a series of mechanical odometers taken from gas pumps and fixed on a frame in parallel lines and they can't move if not wheeling on themselves or following the movement of the whole frame. The frame of the bigger work moves along a track, while the frame of the smaller one is fixed on a gyroscope's axes.

In the whole structure of the artwork the digit is the smallest element.

It's the man reduced to a digit, the number reduced to a mass, which moves where the whole structure is moved by a leader. With all his will, the number, the man, can only turn around the pivot that contains its movement and imposes the direction of the movement.

We can nearly hear Grieg and his Peer Gynt: "To or fro, the path ios equally long and equally short". Anyway,Nanevsky sees this path always leading to the same place.

Goce Nanevski reflects on the man prisoner of social conventions and rules from which he struggles to differentiate himself. This prison exhausts the efforts for his freedom. Sometimes, when the structure begins to move, he illudes himself about an upcoming change. And so the man applauds to the new change. But suddenly the structure stops and the individual can only continue pivoting on his wheel.

The individual tries to escape massification, but the pivot, representing the manipulation of mind he underwent to since when he was a child, prevents him from understanding the sense of the whole that contains him from outside the massification. 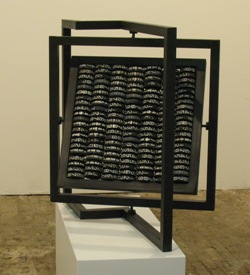 It's the objective condition that locks the man in that dimension that was socially imposed on him.

In the artworks by Goce Nanevski we can't see any kind of rebellion. It appears nearly impossible, as if it were impossible to struggle against the mind manipulation of children that fixed the pivot around which human existence turns.

All Human Beings are prisoner of their existence and applaud and bawl when the mass moves in the anxious waiting for a change. A change that is mere illusion since the structure changed its position but the condition of the single digit on the single wheel didn't change.

I can't go inside Goce Nanevski's head but I can read the symbol of his art related to needs and tensions that are present in the society in which I live.

Nanevski doesn't give us a solution; he describes a situation taking cognizance of his powerless ness, as if he were aware that his own condition is to be a digit on one of these wheels, unable to change the situation in which he lives. 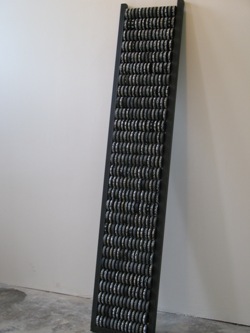 We know all the psychological tensions of the man-number on the gas pump odometer. He lives with anxiety, ambush and rage, desperately trying to modify his own condition. He lives with involvement, pleasure and commitment, trying to fix that condition under the sign of happiness.

Everything spins around the pivot of emotional mind manipulation. The metallic pivot that has been fixed in our heads since we were children and even before, while in our mother's womb. A pivot that takes a lot of emotional pain to be removed, so that we prefer to ignore it: we can protest against our condition of numbers, massified in a collective homologation, buit we never argue about that pivot of children mind manipulation that could allow us to emerge from the mass. We don't do that for ourselves, because of the pain that implies, and we don't do that for our children, because we are not able to spin on our wheel without leading our children to become the same: just numbers on a wheel that contains their life. That pivot becomes a part of ourselves. It's a natural condition of our existence, made of all that preconceived ideas, beliefs and opinions that appears to be natural to us and that we don't allow anybody to criticize. That pivot, that constrains the man as a number on his wheel, became a natural condition. Many men are ready to fight in order to prevent anybody from removing that pivot, which is finally their real and natural condition of existence.

Goce Nanevski tells us about this human condition and allows us to reflect on our existence in the world as social individuals.